FAILURE.  Sometimes it happens in an instant.  Other times you can see it coming like a slow train rolling down the tracks with the momentum of your decisions, bad judgment, missed opportunities and indifference. In this instance it is with the great wisdom afforded by hindsight that I can only recognize my shortcoming and try not to make the same mistake again. Though it is too late for me and my heirs, perhaps their children (or yours) will benefit from this insight. 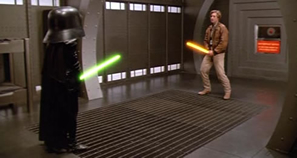 Periodically I regret that I wasn’t more diligent in the effort to train my boys the fine art of How to Pee Standing Up. I admit utter FAILURE.  I’ve got one, the youngest, who embraced it like a Jedi Knight born with the ability to ‘use the Force’. He wields his saber with precision and grace.  …Not his brothers.  They still prefer to pee like girls, which is not an issue at home. However, it’s a different animal altogether when you have to hunt for a reasonably clean location to relieve yourself in a public Men’s Room.

In those formative years of child rearing, we suffered, as all parents do, the reign of terror known as “Changing the Baby”.  Diapers, baby powder, wet wipes, ointments and creams, plastic bags, gas masks,  various and sundry other implements were all stuffed into some ugly flower covered sack of crap (literally).  This emasculating tote was dubbed “the diaper bag”.  I can’t even imagine having to deal with cloth diapers, so to those parents who accept the challenge to Go Green with baby’s bowel movements, I salute you…. BUT I am not that kind of hero.

So, as the first four years trudged along while our oldest denied us the common courtesy of self-potty training, there were admittedly times when I deferred to their mother when it came time to bring the kid in a public restroom for a change.  Why her?  What’s a’matter with me that I couldn’t do it?  “Were my arms broke?” as my father says…. I’ll tell you why: Because MEN ARE ANIMALS!  And I don’t mean in the sense that we can be vulgar, slovenly, foul-mouthed, chauvinistic, sexist, horn-dogs, so on and so forth.  I mean that something transformative happens when some of us cross the threshold of a public bathroom and settle in for a few minutes to wreak havoc behind a bathroom stall’s door.

Before kids, I recall visiting the restroom of the ‘professional’ office building where I worked only to discover that I must be working in close proximity to some blind armless asshole with a severe bladder control issue because it appeared the fire department had unleashed a hose in the stall nearest the door.  Not only is the seat wet, but the floor, the walls, and even the door also appear to be sweating — THE DOOR!  How the Hell does that happen?   I’ll disregard the occasional unflushed toilet.  As unpleasant as that appears, it is easily rectified.  But then there’s the guy in the next stall over that settles in to create something magical.  He grunts, He groans.  There’s a moment of silence and then a musical crescendo of bowel-moving flatulence.  Bravo! Bellissimo!  Is this performance for FREE???  He must think he’s in a soundproof room, which is odd considering there is never a roof on these stalls and I can see my neighbor’s shoes under the partition.  That’s when I suddenly realize there IS a price to the show performed by this One-Man-Band and I’m gonna pay for it as soon as it wafts over here. For the record, there is no difference between the gastrointestinal tract of a man compared to a woman even though you almost never hear a woman ‘let one rip’! The only reasons you ever hear a man fart is because he’s lazy, he doesn’t think anyone can hear him, he thinks it’s funny, or he just doesn’t give a shit (pun intended).


As I await the encore, I notice some unassuming artwork.  Cheap imitations are often scribbled in pen, but this one…THIS is an original. I can tell by the way it is meticulously scratched into the paint with a car key.  It depicts the lower torso of a lady, legs akimbo and an unkempt vagina beckoning closer inspection much like a scene I imagine is all too familiar to obstetricians in the Labor Room.  It’s signed by the artist “- Richard”. Oh but some ill repute has tarnished it with with the clever scrawl: “U suk, Dick!”  I detect a hint of the vandal’s double entendre as I move on to the next exhibit… a Poem, American literature…

Here I sit,
broken hearted.
Came to shit,
but only farted.
(-unsigned)

Now, standing over there at the urinal is the guy who must be talking to his girlfriend or his wife while he stands there with the cell phone in one hand and his dick in the other – That’s sweet.  “..Yah, you too,” he replies to her “I love you” on the other end of the call like we don’t know what that means.  Thanks for sharing your conversation with all of us you self-absorbed jerk.  The ladies room has GOT to be better than this! 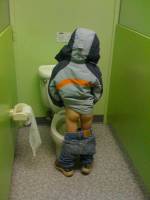 So keep this in mind, all you new and future dads out there: It may seem easier to pass a smelly baby to Mommy with the excuse that the Men’s room is a pig sty even when you admittedly sometimes know it isn’t. But don’t underestimate the value of a little extra father-son time and some manly guidance. It’ll pay off sooner than you think.  It sure beats having to wait for your little princess while he waits to use the least disgusting toilet in the restroom, especially when there is a perfectly good urinal hanging on the wall behind you.  Oh and hey MOM, you can do your boys a favor too:  Don’t just teach them your fancy “Hover Maneuver”.  Make them stand there with their feet together and face the toilet like men!
I won’t make the same mistake moving forward.  Now it’s time to teach them to spit.  They either learn to ‘hock a loogie’ properly or I’m taking the sound “-PTOOEY-” as the next sign of the Apocalypse.
Come back soon and remember to Share!
“Like” the Facebook Fan Page:
http://www.facebook.com/pages/A-Dad-Is-Born/242527792425463?sk=wall
OR visit
www.ADadIsBorn.com
Advertisement